What is a wave?
Have you ever “done the wave” as part of a large crowd at a concert or a baseball game? A group of people jump up, hands in the air and then sit back down.  The people next to them see them and do the same and so on and so on until you have what looks like a wave travelling around the stadium.

In this case, the wave is: the people (particles) jumping up and sitting down (disturbance) travelling around the people-packed-stadium (the medium).

In science, a disturbance refers more specifically to a change or variation of pressure, electrical or magnetic intensity, electric potential, or temperature.

A medium is a substance or material through which a wave moves. It is a collection of interacting particles. In other words, the medium is composed of parts that are capable of interacting with each other. The interactions of one particle of the medium with the next adjacent particle allow the disturbance to travel through the medium.

As seen above, the individual particles in the medium oscillate  about their equilibrium position.  They are only temporarily displaced and always return to their original equilibrium positions (keep your eye on the red particles).  – ie., they do not travel with the wave – there is no movement of matter. 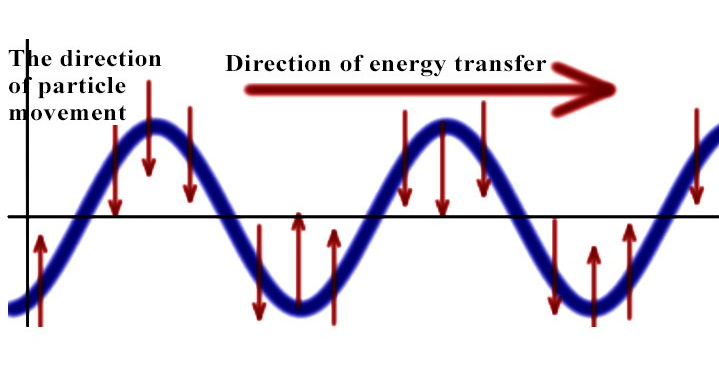 In conclusion, a wave can be described as a disturbance that travels through a medium, transporting energy from one location to another location without transporting matter.